Jeff Bagwell’s baseball and rookie card values would be much higher if not for his most expensive cards being printed around the end of the Junk-Wax ERA. His card values are also shadowed by controversy because Bagwell played during the steroid era (justified or not). 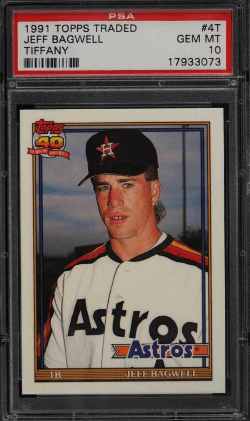 Jeff Bagwell made his debut as an Astro in 1991, hitting 15 homers, knocking in 82 RBIs, and maintaining an average of .294. He snagged Rookie of the Year honors for his efforts and Jeff Bagwell’s rookie card values exploded.

“Bags” rhymes with “high-value, underrated trading cards”. At least it should.

It’s a one-of-one card with strong demand. That alone moves it towards the top of the pecking order for Jeff Bagwell cards (rookie cards included).

This is a horizontally oriented card with a reflective blue background. A neck-up image of Bagwell in his red Astros uniform and black batting helmet occupies the left side of the card.

A prominent patch featuring the MLB “logoman” dominates the card’s right side. An intricate autograph rests between the Bagwell photograph and a sly nameplate below.

This gem won’t break your bank, but it may cost significantly more than the true Bagwell rookie cards. About those…

Long before Bagwell would crowd the plate wearing steroid-pumped armor of muscle, there was Bagwell the rookie. This Bagwell, who looks quizzically into the camera in his iconic yellow, red, and navy Houston Astros uniform.

Were it not for the striking look of Bagwell, this card may not be worth nearly as much as it is. A white border, wood grain-style sub-border, “Astros” nameplate, and “Topps 40” emblem are all that the card’s designers came up with.

Make no mistake, this is a key card from the 1991 Topps Traded set, which also included Jason Giambi and Pudge Rodriguez rookie cards. The problem: the set isn’t well-regarded.

Being that it is a Junk Wax era card with a forgettable overall design, you can own this quirky rookie card for a relative pittance. 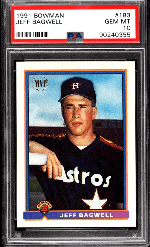 The design is stunningly similar to the Bagwell RC from Topps, emphasizing how few shits card manufacturers gave during this era.

A fresh-faced Bagwell rests his right arm on an unseen surface. Baseball fans will appreciate Bags’ navy Astros uniform, which serves as a portal to the early 90s.

This has only a two-tone blue-and-yellow border, a purple nameplate, and a tiny “B” emblem for Bowman.

If you can find a copy with an autograph then it may be worth your while. These cards were so massively produced, though, that this remains a highly affordable Bagwell baseball card. 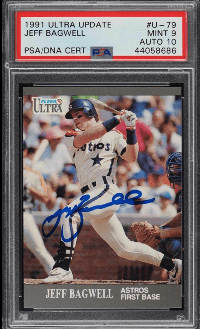 The 1991 Jeff Bagwell Ultra Update RC Auto #U-79 is arguably the most well-regarded of all the Bagwell rookie cards. The caveat: you’re going to need the autograph and a near-perfect grade to see the max value.

Without the autograph, this is a fairly standard Bagwell rookie card. It features two slate grey borders at the top and bottom of the card. The bottom border features a nameplate.

The action shot also differentiates this from the Topps and Bowman Bagwell rookie cards. A muscular Bags completes a picture-perfect swing in a crisp, form-fitting white Astros uniform. 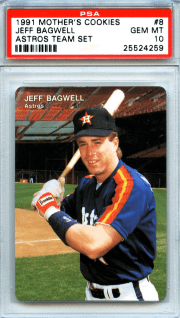 Calling all collectors who appreciate a good old oddball piece. This one is for you.

When you browse the 1991 Jeff Bagwell Mother’s Cookies Astros Team Set RC #8 on eBay, you might also read “Astros Stadium Giveaway”. That’s right, this is a team-sponsored card.

Notably, it is one of the only Bags rookie cards to feature the slugger with a grin on his face. He wears a freshly-laundered white Astros uniform with the trademark tri-color shoulder stripes.

This card isn’t going to cost you much. As a fan of Bagwell, the Astros, or unique baseball relics, this could be a strong find for your collection.

You’ll find a common term applied to players who made their pro debuts in the late 80s or early 90s: junk wax.

No matter how big the star (with a few rare exceptions), the Junk Wax era proved a formidable foe. Cards were mass-produced with little thought given to style or taste.

Unfortunately, Bagwell is yet another victim of junk wax. Despite being a Hall of Famer, Bagwell’s rookie cards will simply never reach the upper echelons of baseball cards.